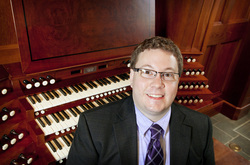 ​A native of Methuen, Massachusetts, ANDREW SCANLON was a professor in the keyboard department at East Carolina University from 2009-2021, where he directed the graduate and undergraduate programs in organ and sacred music.  In addition, he was the organist & choirmaster at St. Paul’s Episcopal Church in Greenville, NC and artistic director of East Carolina Musical Arts Education Foundation. From 2005—2009 Andrew served as organ faculty at Duquesne University, and previously held positions at Christ & St. Stephen’s Episcopal Church (New York), St. Paul’s Episcopal Cathedral (Buffalo), First Presbyterian Church (Pittsburgh) and Marquand Chapel at Yale Divinity School.  A frequent performer at the organ, Scanlon has performed at national conventions of the American Guild of Organists (AGO) and the Organ Historical Society. He is in frequent demand as a clinician and workshop presenter, having presented sessions for AGO conventions in Boston and Richmond, as well as teaching and performing at courses for the Royal School of Church Music in Charlotte and in Nigeria.

​Scanlon has given recitals throughout North America, Europe, and Africa, performing in some of the world’s most significant religious venues such as The Cathedral Church of St. John the Divine, St. Patrick’s Cathedral, and St. Thomas Church Fifth Avenue, (New York), Notre-Dame Cathedral, The American Cathedral and La Trinité Church (Paris) and other venues in England, Italy, Germany, Canada and Croatia.  Actively involved in the AGO, Andrew Scanlon holds the Fellowship diploma (FAGO), has been a faculty member for three Pipe Organ Encounters, serves on both the National Board of Examiners and served six years on the Committee on Professional Certification.  He is a graduate of Duquesne University and both the Institute of Sacred Music and School of Music at Yale University.  His most recent CD recording, Solemn and Celebratory, featuring the Fisk organ at St. Paul’s in Greenville, was released in 2013. The Organists’ Review (UK, June 2014) called Scanlon’s playing on  this recording “stately,” “well measured,” and “exemplary”; and The Diapason (Feb. 2015) describes it as “beautifully realized,” stating that “both performer and organ seem to excel in [the] French Romantic repertoire.” Andrew’s principal teachers have been John Skelton, Ann Labounsky, David Craighead, John Walker, and Thomas Murray.

A founding member of the Foundation, Janette Fishell was our first artistic director and was instrumental in the design and procurement of OPUS 126. Her numerous achievements may be read about on her webpage.